Imagine having someone who looks almost exactly like you, who has your mannerisms, and even shares your DNA! Twins, triplets, and other multiple births have long been a source of fascination for people all around the world. We’re interested in twins, because most of us don’t have one! 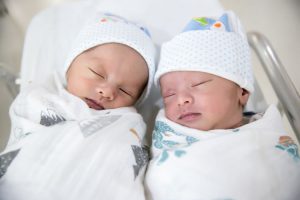 Archaeologists have found evidence of twins in Barcelona, Spain, with bones dating back to the middle ages of the 4th Century BC, so they’ve been around for a long time!
In the late 1980’s a Gold Coast high school recorded 19 sets of identical and fraternal twins, including two sets of teachers who were twins! Talk about seeing double!

The Australian Multiple Birth Association (AMBA) is the only charity in Australia dedicated to improving the lives of twins, triplets and their families, and provide valuable advocacy in many areas. AMBA organises Multiple Birth Awareness Week, which runs from 15-22 March, and highlights the unique realities for multiple birth people and their families. In 2020, the theme is ‘Better Together’. The week aims to connect families with each other, to share experiences, cope better as a family unit, and to engage with health professionals, educators and other organisations who cater specifically for multiple birth families.

Often, twins who look very similar, may not actually be identical, and twins who look quite different to each other may not be fraternal! Being an identical or a fraternal twin is based on more than just physical features, and parents, or even twins themselves, who are curious about their ‘level of twinning’, can do so with a simple, mouth swab Twins DNA Test from GTL Australia.

This test is 100% accurate, and provides answers to all of your identical and fraternal twin questions. Curiosity is not the only reason that the Twins DNA Test is a great tool. Clients sometimes have medical reasons for a twin zygosity test. Monozygotic twins have the same carbon copy of each other’s DNA profiles. For this reason they have the same blood groups which make them perfect blood donors to each other. This is important information to have on hand if there is ever a need for a blood transfusion. Similarly, the same applies to identical twins who donate organs to one another. Due to the shared and identical DNA, there is less likelihood of organ rejection.
One twin could potentially save the life of another!

The Australian Multiple Birth Association has a wealth of information about events during the awareness week, as well as a wide range of resources and helpful links. So this March, embrace the differences and similarities of our most unique and interesting DNA marvels; twins and multiples!